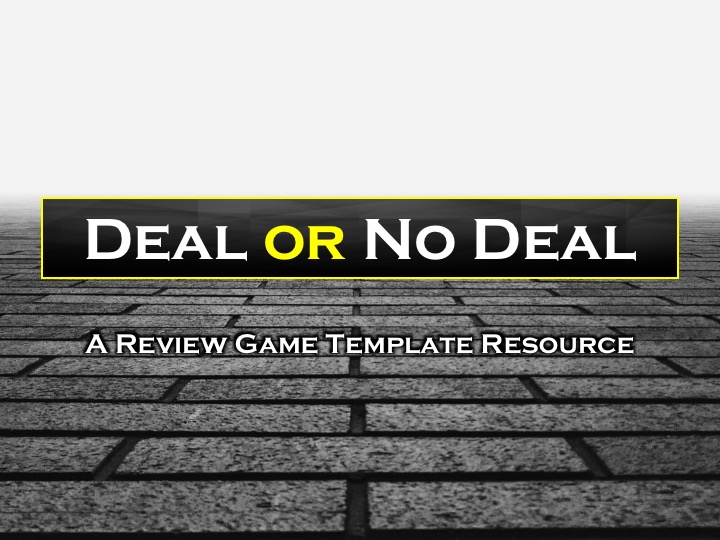 This past weekend, a friend of mine and I went to Dave and Buster’s for an afternoon of fun playing a variety of arcade games. One of the games there took me back to a review game I created in my second year of teaching. Honestly, I’d almost forgotten about it entirely; it was a game was based on the TV show Deal or No Deal.

So, this will be a brief blog post, but with the end of the year approaching, I thought sharing this resource might be useful to someone. That said, if you’re tired of playing Jeopardy, but are looking for a teacher-led review game with similar knowledge level questioning, this is a terrific game to play. The class competes as separate teams, but they are all mutually invested in each other’s success because the group ultimately makes a deal that determines the reward/prize for the collective whole. Because everyone has a stake in the game with every question, this review always generated a considerable amount of student engagement. It’s so suspenseful!

For more on the details of the gameplay, I’ve included slides within the template that have the directions and rules on it. All you would need to do is delete those slides, enter your own questions and answers, and I would recommend adding in music and even video content to really make the game feel realistic (I did when I originally used this template, but I had to delete some of those pieces because they were not mine to share).

If you decide to download this template and/or use it, I would appreciate your feedback in the comments below. Thank you! I hope you and your class enjoy playing Deal or No Deal.

Andrew Easton is an educator who is a thought leader in the education community. He is a high-energy presenter who loves learning and collaborating with teachers. Andrew advocates for innovation in education as a speaker, a blogger, a podcaster, and a future author for Dave Burgess Consulting Inc.