Well Michael Matera, after three days of following your #Five4Five Challenge last week, I decided to start my own #Five4Five attempt on Thursday, Friday and finish Monday-Wednesday just in time for my weekly Thursday blog post. I’m not sure if that cheapens the challenge as it more of a 5 for 7 that way, but I’ve never been one for following rules and conventions anyway so… : )

Okay, now with that said, my goal was to create a video something each day for the five days and share those pieces as a part of a two-part blog post. The challenge aspect here, apart from the 5 for 5 quantity, was to try and create pieces that had some new-to-me element of the process itself or in the end product.

So Michael, thanks for the inspiration; here’s how my week went…

On Thursday, I finalized my entry for a tech-challenge contest that will select six winners and pay for their trip to #ISTE2018 in full. This contest asked entrants to create a tech — something — that in 2 minutes or less details how you use tech in supporting students, why you would like to go to ISTE, and how you intend to take what you learn and share it with others.

In the classroom, I always encourage my students to “zig when everyone else zags” when there is an opportunity to make a product/project your own. So in that same spirit, I sat down and thought about what the most common product would likely look like…

So my thought process was, how do I NOT do those things (or at least do them differently)?

So I began to brainstorm from a place of — What would it look like if I created a video series that provided choices to the judges to allow them to watch what tech endeavors they are most interested in versus the one or two that I would pick? I mean, after all, my job title is personalized learning collaborator right?!? Choice is our thing. Plus, if I provide those choices as a part of a visual, it would give me the chance to show the breadth of the things I have created or co-created with educators (beyond the 1-3 examples the time constraint might permit).

Cool with that part of the overall idea, I committed to creating an image that I could then upload to Thinglink. I’ve recently started using infographics dropped into Thinglink as an easy way to present learners with info and a set of videos in a visually appealing, easy-to-access format. Idea -check. A way of facilitating these video options -check. But I still needed to get away from that “here are my best bites” approach.

After giving my brain some time to storm, I committed to the idea of taking my schedule from the previous week and sharing a 30 second or less summary about the tech influence on each meeting/collaboration on that schedule. I felt this approach had a certain authenticity to it, a fidelity to the day-to-day use of tech that the 1-3 best bites could not provide. Unique approach -check.

So, 20 videos, one new image, and a Thinglink later, here’s what I came up with for the contest and for day one of this #Five4Five challenge. 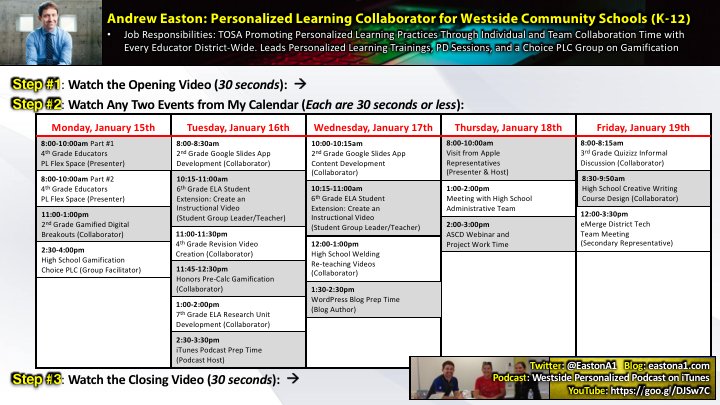 I’ve been making instructional videos for four years now, though they’ve only been bearable to stomach for about the last three years lol. In all that time, though I’ve helped other teachers produce video content, I’ve never had students tackle the challenge of creating instructional videos themselves. So when 6th-grade teacher Becca Kratky came to me with the idea of having her students who tested out of an organizational patterns unit create videos over that content, I was excited to see what they could/would produce.

So, I met with four of her 6th-grades for three class sessions to work on developing their scripts for the videos they had decided to create. The students worked hard, wrote their own ideas and dialogue for the piece, and I tried to reduce my role to that of a guide/support to make the end product truly theirs. After the scripts were finished, we spent two class periods shooting the content for the four videos, and then I offered to do the final edits for them (given that we had only been allocated five class sessions to finish this project).

On this date, I worked on and finalized Emon’s video on Cause and Effect. I’m happy to share his work here and to again remind you that he wrote out the dialogue for the entire video, the skit included. Before the end of the school day, I shared this video (in person) with the group of four students and their teachers. It was a terrific way to end the week, and to end my second day of my #Five4Five on (co-)creating a video something I’ve never (co-)created before.

View all posts by aeaston1